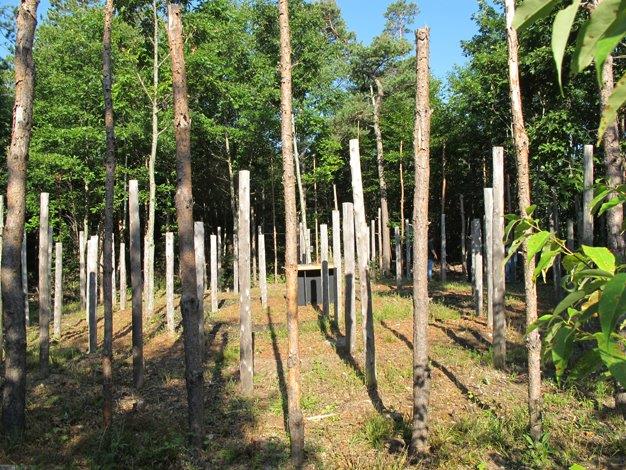 The Celestial Harp at Forest Woodhenge (2010)

A match made in heaven! The Celestial Harp, a musical instrument designed to play the Zodiac and the I Ching, performs at Forest Woodhenge, a Druidic mandala of 128 posts in six concentric circles – a super sundial designed to observe the effects and phenomena of the Zodiac and the I Ching. The horoscope and the hexagrams of the moment of the performance were played, enhancing the cosmic alignment.

The Celestial Harp at Forest Woodhenge

This performance marks the merging of two significant streams of Robin’s artistic, astrological and mystical vision that descended on him in 1969 after spending thirteen months in solitude and darkness, in Southern India, without coming out or seeing another person. The vision represented a union of astrology and the I Ching as one language, of colour and sound as healing energies, and of space and time as interwoven dimensions of being.

By 1979 Robin had designed, constructed and gave the first performance on the Celestial Harp at the World Symposium for Humanity. It took six years for the designs to manifest and two more to actually build the harp. It took another ten years and a lot of money invested in strings before the first good tuning system was developed around 1989. Since then Robin has recorded one cd every year. There were several live performances but most of the recording was done in the studio.

There are 72 strings on the Celestial Harp including 8 double strings, making a total of 64 string placements which correspond to the 64 hexagrams of the I Ching. The constellations of the Zodiac are inlaid on the top of the harp, and the 64 hexagrams on the spiral bridge. The Celestial Harp was built as a model of the solar system in space. The strings are the Zodiac and your fingers are the Sun, Moon and planets. Measurements on the harp even include the correct precession of the equinox for 1979.

The Forest Woodhenge took three years to design, build and complete. It is a super sundial and observatory like Stonehenge which was originally a woodhenge. The forest had to be cleared of trees and brush. An exact alignment to the north-south axis was made with a piece of rope at true noon, which at the woodhenge was close to 1:15 PM. The first circle has two posts, one in the north and one in the south. The second circle has four posts for north, east, west and south. The third circle consists of eight posts. The fourth circle has 16 posts. The fifth circle has 32 posts and the sixth circle has 64 posts which correspond to the 64 hexagrams of the I Ching and to the Zodiac. It is a solar observatory observing light in space. It is a sister to the Celestial Harp which explores sound in space.

The Forest Woodhenge is located deep in a forest along very un-maintained roads or snowmobile paths. Cars cannot travel there. Only jeeps and some high axled vehicles can travel those rugged paths. In thirty years the Celestial Harp lived safetly in studios. A trip out into the wilderness was a life threatening event. Too much dampness or rain, to much sunlight, too high or too low a temperature could all produce extremely harmful effects on the musical instrument. In its case, the harp weighs about 175 pounds and takes several people to move it. The mechanics of getting it into the woods to Forest Woodhenge were considerable. The event had been cancelled twice before in 2009 due to wet or cold. This time it was set for July 17, 2010.

In spite of the anxiety, everything went well. The Celestial Harp just fit into the truck with less than a millimeter to spare. Thunderstorms were predicted for the late morning and early afternoon. Rather than cancel, the performance time was shifted to mid-morning,, which meant we had to leave by sunrise at the latest. It all went well. Packing the harp, its stand and recording equipment and making to the forest woodhenge about 90 minutes away all went smoothly. The carrying of the harp to the woodhenge and setting it up also went smoothly. After a re-tuning and sound tests, the performance began.

By making it so early, we lost any audience we were going to have. But the Sun shone brightly and we had great shadows in the woodhenge itself. The shadows are part of the expression of the woodhenge and were a welcome addition to the performance.

There were no facilities or electrical outlets in the forest so Peter, our camera man had to bring a supply of batteries for his newly acquired high definition video camera. When the batteries would run out our performance would end. We finished just before noon and had the instrument packed up and in the truck as storm clouds were gathering. The rain was starting just as we arrived back home at the Star Centre Studio in Aurora. 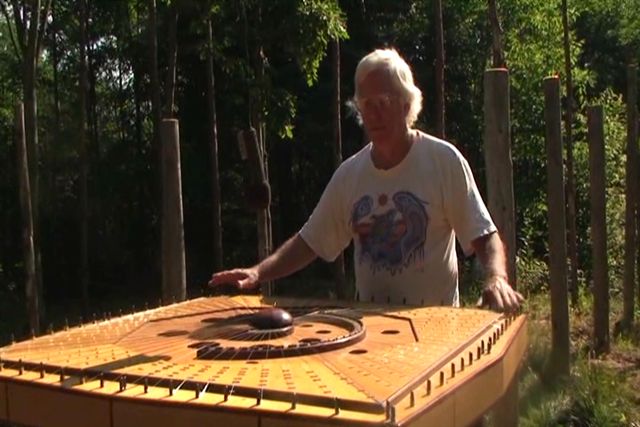 As usual, just as the performance work was done, the work was really just beginning, or at least the editing phase of it. This dvd is the result of these efforts. The Forest Woodhenge was the perfect stage for the Celestial Harp to perform on. And one of the pieces performed was playing the horoscope of the moment we were playing and for the exact location of the Forest Woodhenge. Many forces and streams of consciousness were at play in this cosmic performance. If some sense of this awesome performance is felt by you then this dvd will have accomplished its part and helped the Celestial Harp to fulfill another step in its divine destiny.

This performance marks the real beginning of the Celestial Harp reaching out into the world. Within and without, it has the blessing of the nature spirits, Gods and angels. The Celestial Harp expands the parameters of music and opens minds and hearts to new sounds and melodies.

Any feedback is welcome. Your comments or experiences during this performance would be most helpful in letting others know about the incredible Celestial Harp and Forest Woodhenge. We are also collecting names of anyone interested in purchasing a Celestial Harp for themselves, or in anyone wishing to invest in the construction of Celestial Harps. 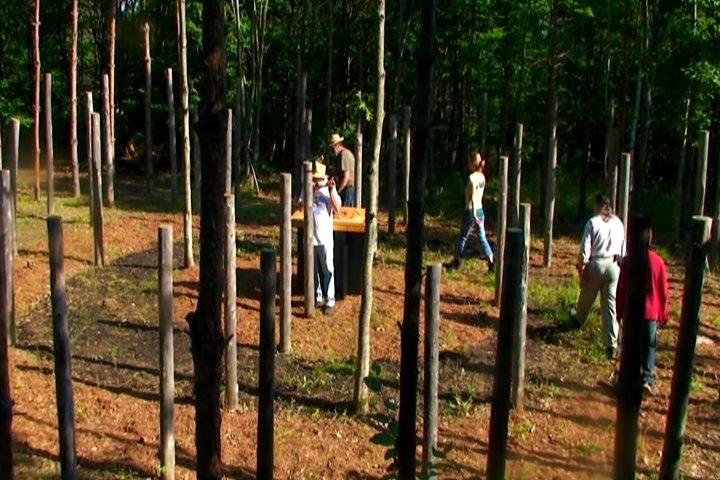 Robin blows the Buffalo horn in the four directions as the musicians enter Forest Woodhenge walking around the wheel and spiralling inward to the centre. 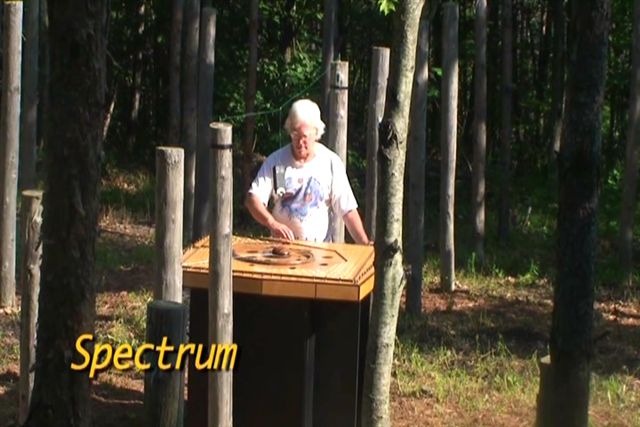 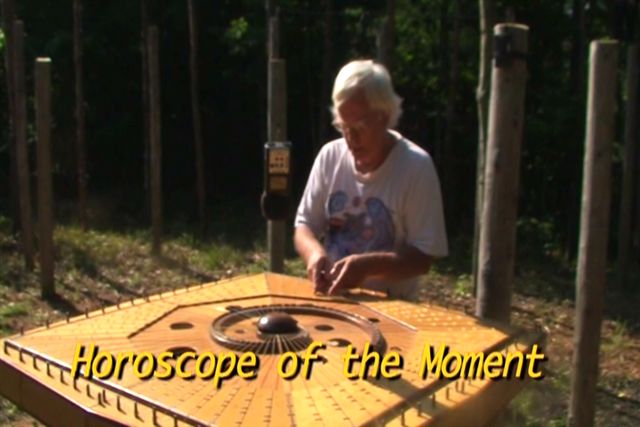 This piece is based upon the horoscope calculated for the moment of the performance. The planetary positions at the time of performance both in the zodiac and in the I Ching hexagrams determined the sounds and melodies played on the Celestial Harp. The resulting music resonated deeply within the woodhenge built to be receptive to these celestial frequencies. 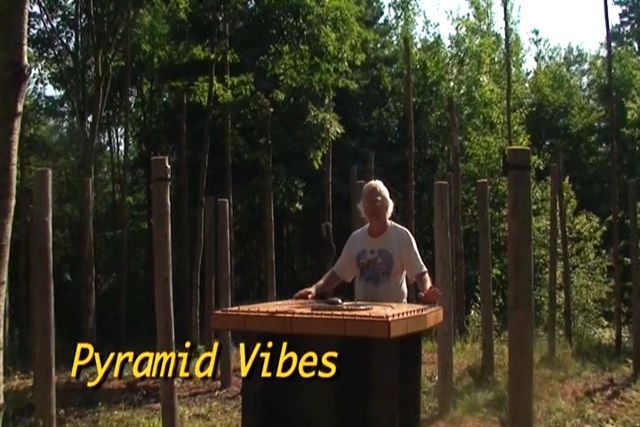 The Celestial Harp was design on the basis of the spiral, the circle and the square. In this piece the corner strings are struck to resonate the rest of the strings. The corners of the harp representing the pyramid were resonated to activate the zodiac.

In this piece the position of Sedna, the Sea Goddess of the North, in the horoscope of the moment was played along with the zodiac position of the magical spirit Aziel, which according to Franz Bardon occupies 11-15 degrees of Taurus. Aziel is the spirit of Divine Justice and Mercy and rules over hidden treasures and subterranean waters. 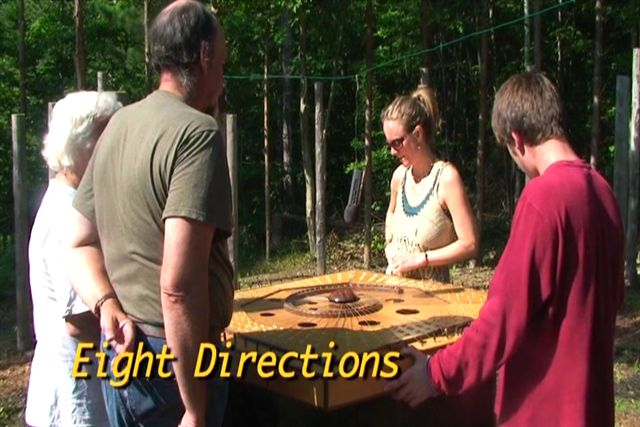 This is a percussive piece for four on the harp. The 8 trigrams of the I Ching are played. The trigrams also correspond to the eight directions and to eight divisions of the zodiac. 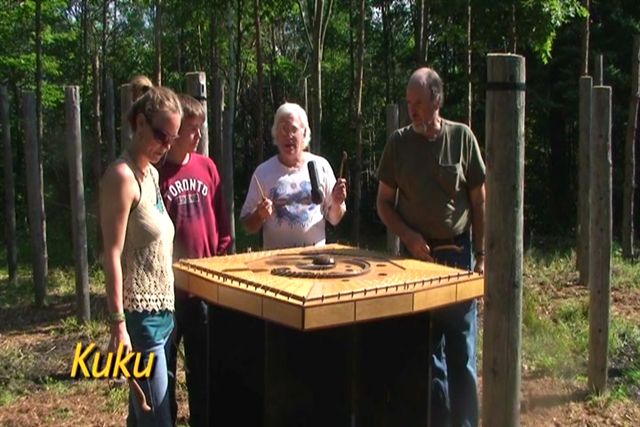 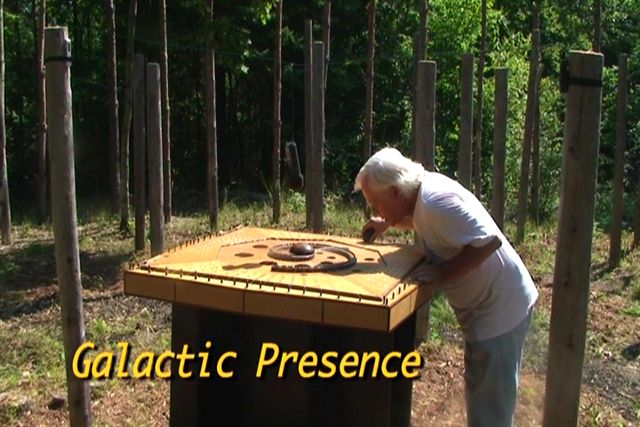 Chanting a sacred chant into the Celestial harp while playing on the strings representing the super galactic centre and other galactic clusters. The sounds Ha, Ri and Om were chanted melodically and then the strings were bowed replicating the melody of the chant. Chanting into the Celsetial Harp resonates the many strings and stimulates a chorus of harmonies. 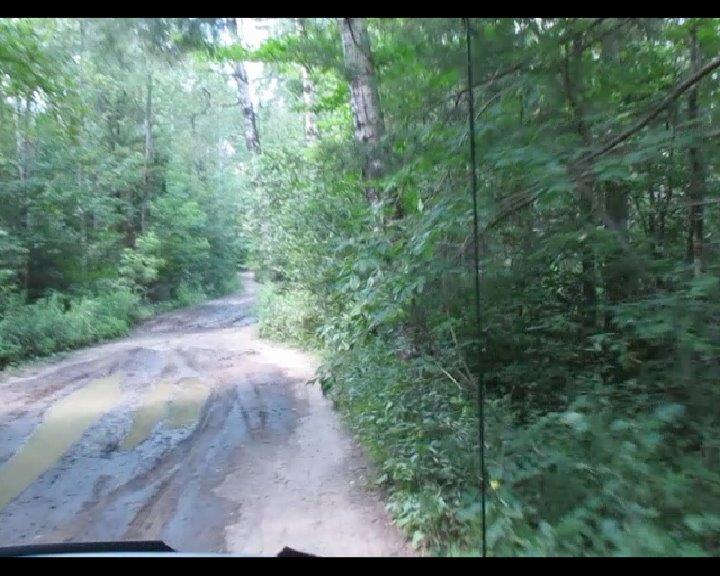 9, Credits and Exit from forest.

This is the end clip of the video with the credits and a small trailer showing part of the drive out of the forest. You can get a sense of the isolation of Forest Woodhenge and the performance.